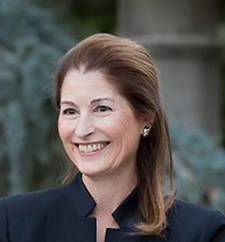 Kim Meredith is the Chief Executive Officer of the San Francisco General Hospital Foundation, overseeing all aspects of the Foundation and working closely with the Foundation Board of Directors. Before joining the Foundation, she spent 11 years as the inaugural Executive Director of the Stanford Center on Philanthropy and Civil Society (Stanford PACS). During her tenure, Kim was responsible for strategic leadership, strong financial performance, and consistent organizational growth—including scaling the Stanford PACS by expanding research and programmatic initiatives like the Stanford Innovation Social Review.

Kim launched her business career in corporate America at AT&T and has since gone on to serve as the Chief Development Officer for the Planned Parenthood Federation of America in New York City, the Chief Operating Officer for Planned Parenthood Golden Gate in San Francisco. Currently, she serves on the Advisory Board for Stanford PACS, the Board of Directors for the George Lucas Educational Foundation, and more.

Times are changing in philanthropy—and we have the data to prove it. According to 2018 research performed by Stanford PACS, we see barely 1% of the donors accounting for 49% of gifts. Even more intriguing is that 20 million fewer households participated in charitable giving since the year 2000.

Listen to this episode of Philanthropy212 with Penny Cowden as she hosts Kim Meredith, the former inaugural Executive Director of Stanford PACS. Kim shares insight into America’s changing philanthropic landscape—including how donor giving is transforming, the sectors receiving the most gifts, the rise of Donor Advised Funds, and more.